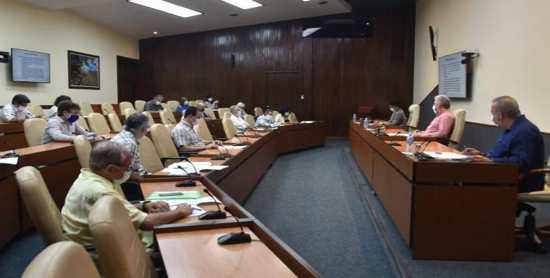 Photo: RHCHavana, May 22 (RHC)-- "In the fight against the pandemic, we have achieved very dignified results, and more so given the conditions in which the country has done so," said Cuban President Miguel Díaz-Canel, as he exchanged views once again with the group of scientists and experts who are directly involved in Cuba's battle against COVID-19.

During the dialogue with the specialists at the Palace of the Revolution, the president stressed that before the disease reached the national territory, "we already had a complex situation, both economic and social, caused by the blockade and the Helms-Burton Law."

However, "the scientific results we have achieved have given the country tremendous visibility and prestige, as a fundamental component in the confrontation."  That we don't have a resurgence, he said, is the key and, of course, to get the Cuban vaccine as quickly as possible.

Díaz-Canel referred to the modes of action which must be maintained when Cuba begins to move towards normality, so as not to go through the situation of a resurgence of the epidemic that other nations have had, including hygienic measures, physical distancing, active research, differentiated attention to the vulnerable, regulation of the number of people in certain areas, social responsibility and constant research and study of the disease.

He commented that "with all the impact and scientific contribution in times of pandemic, a knowledge base has been formed that is giving us outlets in predicting the disease and, therefore, in methods of acting and perfecting our protocols." (RHC)