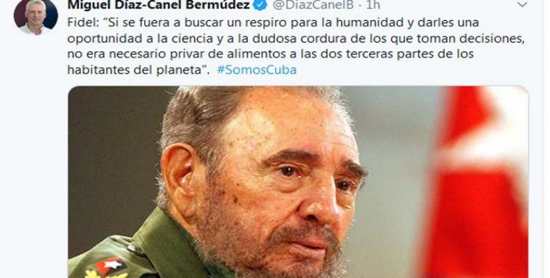 Photo: RHCHavana, May 22.- Cuban President Miguel Díaz-Canel recalled the words of the historic leader of the Revolution Fidel Castro on the importance of science in the search for a better future for humanity.

"If we were to seek a respite for humanity and give science and the dubious sanity of the decision makers a chance, it was not necessary to deprive two-thirds of the planet's inhabitants of food," he shared on the Twitter network.

This reflection of the Commander in Chief is part of his article "Nobody wants to take the bull by the horns," published in the Cuban press on May 22, 2007.

At that time, Fidel criticized the governments of the United States and other countries that launched into the use of corn and all kinds of cereals as raw materials for ethanol production.  In his reflection, he recalled how U.S. President George W. Bush proclaimed "his diabolical idea of producing fuel from food" while hundreds of factories were being built or expanded for that purpose.

"In those days, the rich industrialized countries were already cherishing the same idea, using all kinds of grains and oil seeds, including sunflower and soybeans, sources of excellent protein and oils," he wrote.

He stressed the need for an energy revolution, given the waste of energy in the United States and the inequality of its distribution in the world.

He pointed out that this country, with one of the richest territories in hydrocarbons, suffers from a great deficit of oil and gas.  The Cuban leader also denounced that in response to the fuel shortage, Washington "decided to extract them from the food that is needed for the increasingly hungry stomachs of the poor of the Earth.

Fidel Castro called attention to the dangers to the environment and the human species of climate change and its immediate consequences. (RHC)