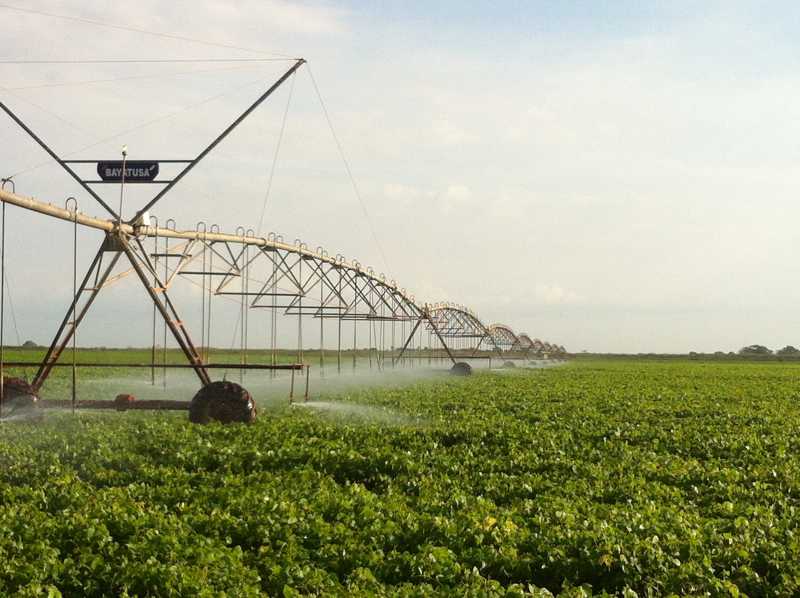 Sierra de Cubitas municipality´s economic development is higher than that of before the revolutionary triumph in January 1959, this growth has allowed the municipality to remain as one of the most productive territories of the province of Camagüey, guaranteeing a part of the food of its inhabitants and exporting to other territories of the province and the country some of its products such as citrus and root vegetables.

The municipality is constituted by different communities where more than 18 000 inhabitants reside who are in charge of production and services, in addition to education and health among others.

The foundation of the current municipality of Sierra de Cubitas and the creation of the Organs of People's Power opened a new stage for the economic development of the territory reaching high productions as follows in this chart:

As exportable line, the citrus made important investments for the improvement of the quality of the products, built in 1979 the plant of benefit, with Italian technology that in its fruitful years of work reached the following results of sales to other countries: (expressed in metric ton (m/t) 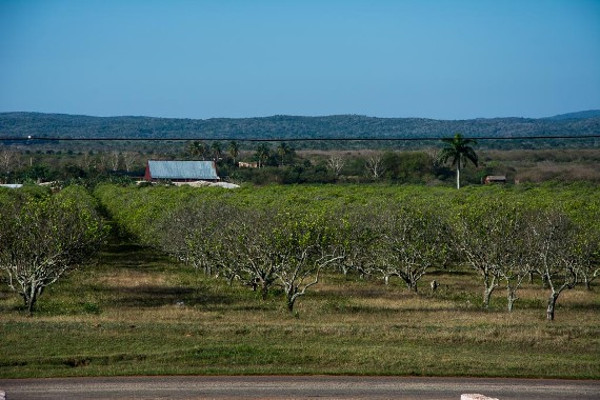 Citrus plantations in the municipality.

An additional element that made it possible to substantially raise yields in those years was the creation of an adequate irrigation system. In the year 1980 it was accomplished the construction of a pumping station, the main one of that hydraulic complex.

To carry out its operation, it had four pumps (turbines) of Japanese technology, each with an output capacity of 2.2 m³ of water per second; it could deliver 8.8 m³ of water per second that were transported by two metal conductors at a distance of 700 meters to the first section of the territory canal.

It was in 1978 that began the building of a stone mill of Spanish origin with a capacity of 1200 m³, which began its work in 1983, reaching a production in 1988 of 668 600 m³, which shows the rise in the province . Due to the achievement of their productive balances, they became creditors of the status of National Vanguard.

In addition to the production of aggregates, in 1979 the asphalt plant was founded, in 1988 it produced 34,560 m/t of asphalt mixture, allowing that in the municipality the greatest number of kilometers of roads are asphalted and changed into roads.

In the basic industry, the territory participates in the electrical energy distribution; the essential activities in those years were based on the electrification of all population settlements and economic and social ones; for this, kilometers of roads that carry this service to thousands of users were installed in the innovatory period; with the purpose to improve its quality, a modern 110 Kw substation was built in 1986.

At present, the territory has an establishment dedicated mostly to the exploitation and preservation of the forest area framed in the Sierra de Cubitas, being the production of charcoal for export and use by the population one of the most important activities within the sector.

Food production for the people is one of the main tasks of farmers and productive units of the territory, which is put into the hands of the people through the agricultural fairs carried out systematically in the municipality.

This territory is  composed of several cooperatives of independent production that produce  different types and varieties of citrus fruit that are marketed in the municipality, province and other territories of the country, such is  the harvest of grapefruit sent to other provinces and the production of special citrus for tourism.

The company is immersed in business improvement that allows it to increase the production of citrus fruits and other products in different self-consumption to guarantee the food of its workers. The company has a calculation center where the data referring to production is automated and a mimi industry dedicated to the production of food.

Among the productions in the territory are grapefruit, orange and products derived from spices like syrup and sweets in syrup. This Company is composed of several agricultural production farms and credit and service cooperatives that are in charge of supplying the town's population with root vegetables and vegetables.

In the popular community of Vilató there are several places dedicated to the production of cassava, food used by the population of the territory since the emergence of the first settlements. This practice was transmitted to our days from generation to generation, as it was a favorite dish in the diet of our aborigines.

In recent years, livestock has reached a high level of development and production of milk, allowing some communities to self-supply fresh milk for children up to six years, in addition to contributing to the delivery to kindergarteners.
Bakeries and sweet shops

There are several bakeries in the territory that guarantee the supply of bread and sweets to all the communities of the municipality, the schools are supplied as well as the nurseries, grandparents' houses and workplaces, while guaranteeing the products that are marketed in the gastronomic centers and cafeterias of the municipality.

The Vietnam Heroico Quarry is located in Sierra de Cubitas near the mountains and guarantees the production of aggregates and materials for the construction of homes and state establishments in the province with an impact on services to the population. For what has been recognized the effort of its workers for their contribution to this beautiful work.

The Telecommunications Company in the municipality has a management that carried out the technology change in order to digitize the territory and achieve quality in communications with other territories, mainly with the assembly of a plant in Sola and La Filial communities.

An important part of the population has Wi-fi services at their disposal in response to the high number of cell phones available to residents of the municipality.

Sierra de Cubitas has emerged as one of the territories dedicated to the production of snuff, a product that was introduced several years ago and has reached an accelerated development with the creation of new cooperatives and independent producers, as the municipality has the natural conditions necessary to develop this crop with quality.

The workers dedicated to this activity have won several rewards  such as National Vanguard for several years, they have  one of the best work groups that has allowed to ensure the cleanliness of communities, the cultivation of flowers and collect recyclable materials, in addition to the production of fertilizers from the products of waste.

The company of Aqueducts is the one in charge to guarantee the water supply to the different communities and towns; it has a hydraulic facilities and the transportation of the precious liquid by means of pipes to the communities and homes when it is needed.

It is the company that is responsible for ensuring the electrification, repair and maintenance of the technologies offered by the services in the different settlements of the territory. The entity carried out the installation of new generator sets that assurance the supply of energy demanded by the municipality and contribute to the delivery of this to the national network.

Education plays a fundamental role in the daily development. The educational plan of Sierra de Cubitas was founded in September 1973, thanks to the efforts of the Cuban Revolution to eliminate illiteracy in the country, mainly in the fields, as well as to make faithful the principle of the National Hero José Martí to combine the study with the work to contribute in the formation of the new man that the Homeland needs.

Education in Sierra de Cubitas has all levels of education, in which children, young people and adults are prepared in different subjects.

If you compare Sierra de Cubitas today, with what existed before the revolutionary triumph of 1959, it can be concluded that it is a dream come true. There were no schools like the current ones, nor were there roads, buildings, houses of culture, cinemas, there was practically nothing that exists today.
Cultural traditions

In Sierra de Cubitas there is an intense cultural tradition of the Haitian side, which is manifested mainly through music and popular dances that have survived to this day, proof of this are the Folkloric groups Caidije and Dance Nuveau. The famous Caidije Dance was formed in 1926 in the rural community of the same name. Since then it has remained strong in the tradition of Holy Week where several framers from different towns meet: La Lima, La Esperanza, Senado, Minas, El Veinticuatro, La Grabiela, La Tumba, and of course Caidije.

With the revolutionary triumph several programs like Education and Health benefit. In 1986, the family doctor program was introduced in the municipality, providing an improvement in the attention to the population, although the vast majority of its personnel were not typical of the territory. In the 1990s, the family doctor's plan was strengthened in schools, the maternal home was opened, dental clinics, the home for the elderly and the construction of the pharmacy network in the different communities began.

In 2000, the construction of the new polyclinic community mental health center, the main pharmacy, the rehabilitation room, the grandfather's home and the training of professionals of the territory began through the university services.
Sport

At present, the Revolution focus its attention in the development and well-being of children, youth and adults .The mass of our people in physical activity have been and will be the essence of the Cuban social system. 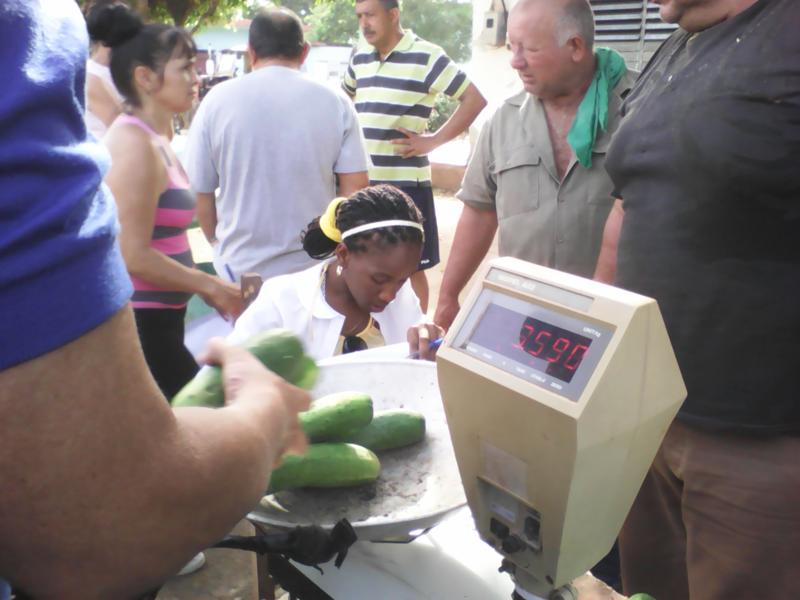 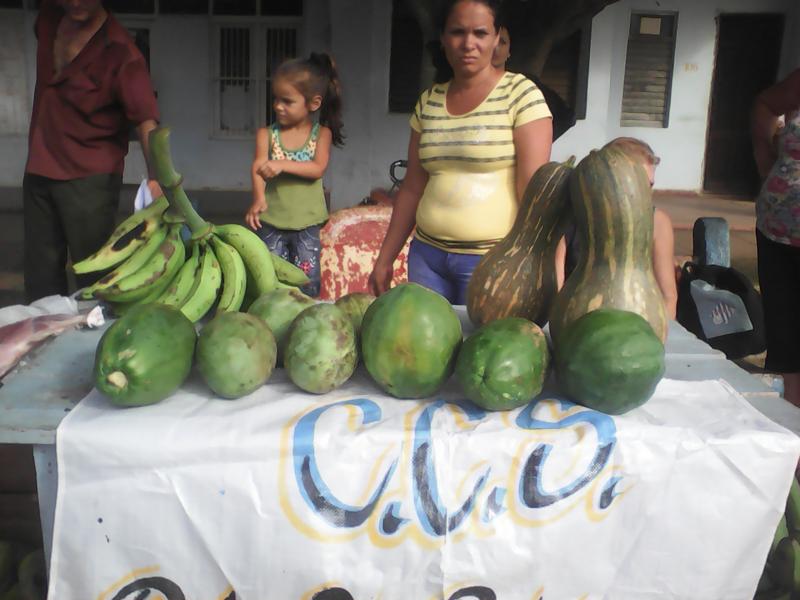 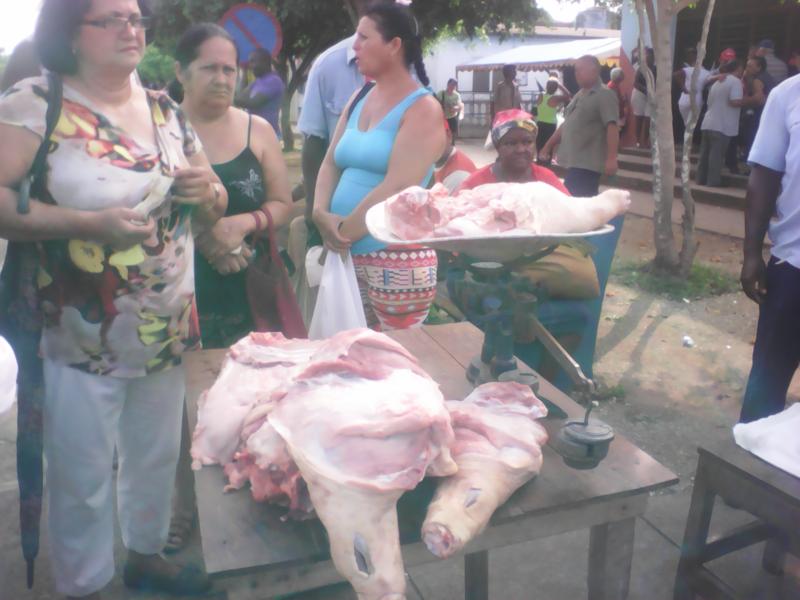 Sale of food to the population/Foto: Miguel Ángel Quiroga Acosta