At the beginning of the 20th century, there were in Cuba several settlements. One of them was "La Gloria", a place that at first was not so glorifying.

A crafty and attractive advertising campaign carried out in different counties and places in the United States of America in the early twentieth century made farmers, adventurers and poor families of that country go out in search of the earthly paradise south of its geography described by the media.

Massive migrations of cheap labor had to be attracted to the newly intervened island. That's how the Cuban Land and Steamship Company did not pay attention to scruples when promising avenues, railroads, hotels, an efficient port, restaurants and theaters ... all the comforts of a neighbor of a dream place to which they named La Gloria City.

The popular name "embarked" a few aboard the steamer "Yarmouth", through which the first migration of Americans to the Greater Antilles became a reality. In a desert place a little more than 15 miles west of the Bay of Nuevitas, in the province of Camagüey, the first emigrants disembarked in the place with the metaphorical name of La Gloria, on October 9, 1899.

The pursued objective was to fill the island with colonies of American citizens. In Cuba the rehearsal began almost simultaneously in thirty-seven locations, such as and near La Gloria in the Valley of Cubitas, Garden City, City of Pilot, Columbia City, Washington City, New Port, Port Viaro, etc. As well as, others in Ceballos, Ciego de Ávila, and Barthe and Omaha in Las Tunas.

Of two hundred North American people who arrived in Cuba, about 160 dared to walk "four miles of mud, gnats and mosquitoes", according to the researcher Enrique Cirules, in his attractive book "Conversation with the last North American" (see the bottom of this article). To everyone's amazement, in 1914 the scammed ones proved to be hard-working farmers who changed the original and precarious tents into a hundred cedar and mahogany bungalows, in their Balloon Frame style on woody pilings.

FOR NOT TO COME BACK

They discovered a fertile valley, filled it with orange groves and vegetables, which they exported to Florida. With the first profits they founded a northern style city with wide and straight roads, bridges of concrete and wood, and two spacious two-story hotels - a luxury for the time, a factory of soaps, electric light and street lighting.

The inhabitants of North American origin were joined by Italians, Polish, Danes and even Germans who even published a bimonthly newspaper "The Cuban American", and printed books and brochures with topics of interest to the community. They built an artisan factory of cowboy shoes and sandals for ladies, an Episcopal church and a Methodist one, a train way and even a small sugar mill.

The houses were towering and spacious, the streets clean and shaded by the wonderful trees. There was a 12-piece orchestra with violas, violins, clarinets and some percussion instruments for the holidays. They exported their products and at the same time received the necessary logistics through the seaport located in Nuevitas.

The Gloria City, was the prototype of colony that the monopolistic companies of the United States wanted to implant in Cuba, there was transplanted the North American social amalgam with its virtues, vices and defects, the great mass of the settlers who established in La Gloria City were hard-working and enterprising people, but also came challenging gunmen, prostitutes, fugitives from justice, players, rascals and adventurers of all kinds.

With time that colony was reduced almost to nothing, its economy faded due to the disinterestedness of the powerful empire that did not take into account that place of peaceful farmers, merchants and intellectuals who put the stones of the first town in Cuba inhabited by citizens of the United States of North America.

In 1917 a decline of the place developed and many settlers left the place. Cuband Land and Washington´s government were not interested because the Major of the Antilles was their property. They manipulated the Cuban government of the Neo-republic as they wanted.

Those who had been deceived to be used in a political rehearsal were left to their own fate. The final blow was a law in the United States that prohibited the entry into the country of fruits from abroad. This ensured a fresh and less expensive product for the northern market than the imported ones.

Each week La Gloria was more deserted, the cyclone of 32 was its final destruction.

The existence of La Gloria created a community that after the triumph of the Revolution was more prosperous and revolutionary. The Anglo-Saxon and Latin mixture inherited a community of honest and determined inhabitants to make their own future.

The last of La Gloria City founders lived there inspired the testimony of Cirules. Other of his descendants rest in an original stone cemetery that together with other relics tries to preserve the place and its surroundings.

In the decade of the 90s of the last century, like the whole country, the local economy felt the symptoms of depression, creating some social problems that only a socialist revolution could face and solve with the active participation of its own inhabitants.Today, La Gloria stands as one a prosperous community in the current Sierra de Cubitas compared to then, about 60 kilometers from the provincial capital and not far from Piloto Beach, a natural resort visited by the people of Camagüey City.

Many different traditions such as the rodeo and other cultural manifestations of the first American colony in Cuba are being rescued in the place, as well, people continue working for the well-being of the population and many other important actions are carried out for the defense of the environment and the health of its inhabitants.

With the inheritance still of the first North American settlement on the Island, the new settlers of La Gloria build a new city, functional, productive and sustainable, lacking luxuries and vices, but with a lot of dignity and quality of life.

Some data about Enrique Cirules, the author of “Conversation with the last North American"
This novel received in 1973 the Prize 26 of Julio, of the Revolutionary Armed Forces, and narrates one of "the most beautiful, sad and hallucinating legends of the time; the one of a man of Irish, Indian, German and English blood processed in the United States, and Cuban for the time ".
Enrique Cirules, who as a  journalist, narrator and essayist,  deserved important awards such as the 1993 Casa de las Américas Prize and the 1994 Critical Literary Prize, for "The Empire of Havana", a study on the activities of the North American mafia in Cuba.
According to Fernando Rodríguez Sosa, a literary critic and Cuban cultural promoter, Conversation with the Last North American confirms the certainty that Enrique Cirules investigated a little-known passage in the history of the island. In nearly twenty chapters, through the voice of William Stokes, "the last American", is reconstructed and evokes the genesis, foundation, development, splendor and death of La Gloria City.

Anecdotes and memories are told, in first person, by William Stokes, making men and women the main protagonists of the story.

Cirules´ biography also includes the story book "The Other War", the novel "Santa Clara Santa" and the testimony "The Secret Life of Meyer Lansky", among other titles. 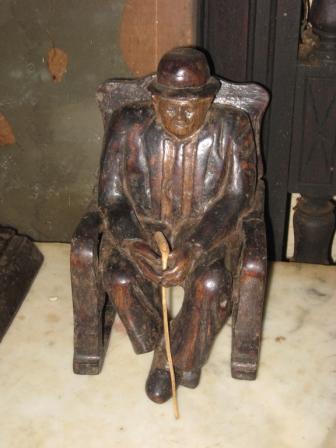 Figurine made by an original photo by William Stokes. 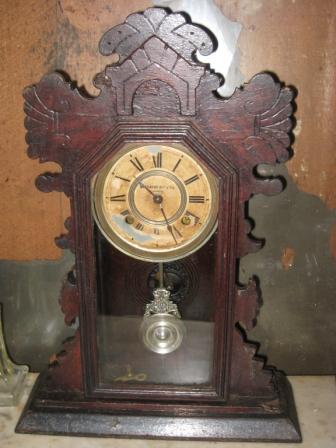 Clock belonging to the family of William Stokes created more than two centuries ago. 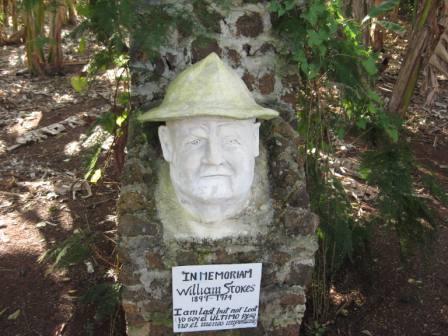 Bust of William Stokes created by Yudel Pacheco one of the cultural promoters of Sierra de Cubitas. 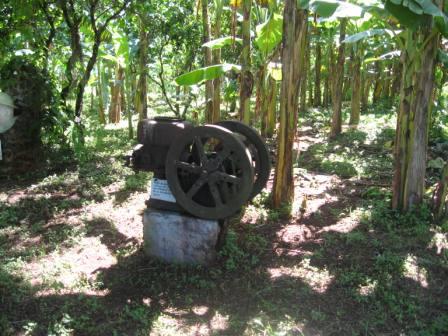 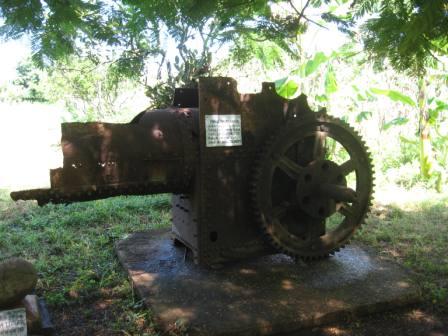 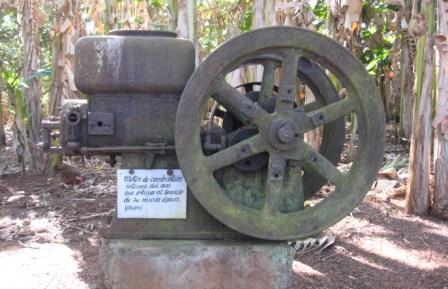 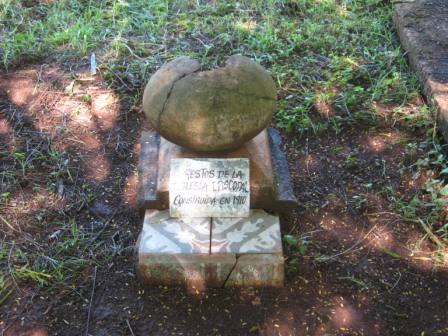 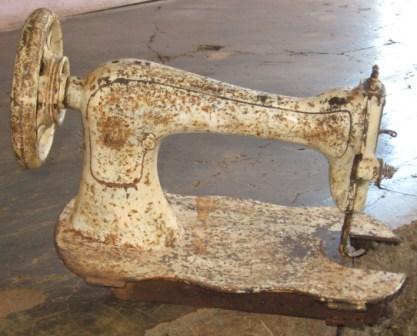 Sewing machine of the time. 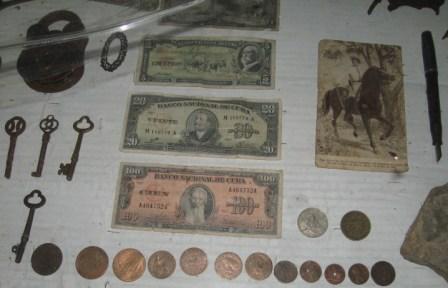 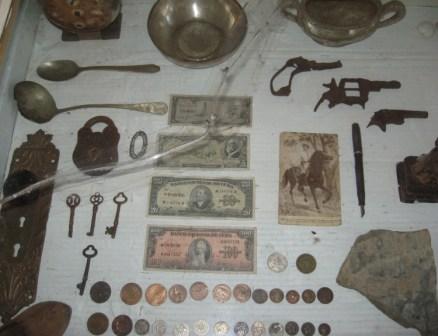 Objects belonging to some Americans who lived in La Gloria 2. 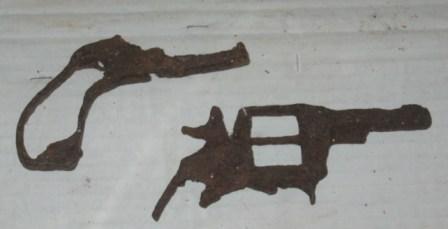 These revolvers belonging to Americans who lived in La Gloria are exhibited among the exhibition of objects of the time.

Walking to her home is already an unforgettable experience.

Finding her in the midst of the environment that makes up her reality, it is even more emotional, because those who do not know her can not imagine how much feeling is hidden behind each memory, Mirta Iglesias, the woman who was there until the final moment near Wiliam Stokes , the last American who lived in La Gloria.

Mirta: Willie arrived in Cuba at the age of one year with his dad and then at six he went to the United States as a walk. They came back when everything here was still a thick forest, because they were deceived by the Americans, although later they made their houses because they were told that all this was a town, but there was nothing here.

I remember Willie very well. He had a little store and he trusted the poor to live, some paid him, others did not, until the end he was left with nothing.

My aunt started working with the Americans at Willie's house, and I accompanied her, sometimes I stayed with her to sleep there.

But this time was how life almost always provides; Mirta Iglesias is part of the history of La Gloria, Sierra de Cubitas, Camagüey and Cuba.